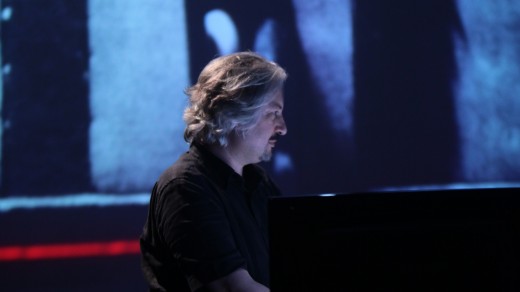 Born in 1963, Electrical Engineer with a specialization in telecommunications, he received a First Prize and a higher diploma in Electroacoustic Composition at the Royal Conservatories of Music in Brussels (1993) and in Mons (1996).
First researcher in the field of speech processing at the Free University of Brussels, he was during 5 years head of the Computer Music Research at the Polytechnic Faculty and the Royal Conservatory of Music in Mons (Belgium) where he developed real-time software tools for analysis, synthesis, transformation and spatialization of sounds, used by composers like Leo Kupper and Robert Normandeau. He collaborated on several occasions with IRCAM where his programs were used by Emmanuel Nunes, Luca Francesconi, Joshua Fineberg and others.

He continued his research within ARTeM where he developed several interactive systems for studio use, concerts, sound installations and dance performances, using a wide variety of sensors.
He was researcher from 2008 to 2013 at the Numediart Institute of the University in Mons and professor from 2008 to 2015 at Arts2, the School for the Arts in Mons.

He developed the sensors and the sound analysis and transformation tools, based on models of auditory perception, used by violinist Stevie Wishart for the Quartet project led by Margie Medlin and premiered in 2007 in London.
His electroacoustic music shows a special interest for multiphony and sound spatialisation as well as for research into new forms of sound transformation. Besides pure acousmatic music, he is developing virtual instruments for his live electroacoustic concerts, using custom-made wearable sensors. First used in the framework of improvisation with musicians like Jean-Paul Dessy, Eric Sleichim or Stevie Wishart, those tools were used in 2007 for solo concerts, in Reykjavik in Iceland and, combined with specific spatialization algorithms for the dome, in Karslruhe, Budapest and Munich as part of a commission from ZKM. The latest developments were used for an orchestra of twelve performers of joysticks, gamepads and sensors in the Ars Musica Festival in 2011 and for the eVanescens project in 2012, with a cellist equipped with sensors and interactive video by Laura Colmenares Guerra.

Fascinated by the dialogue between electroacoustic music and other art forms, he also composes music for film, video, dance, theatre and sound installation.
His long lasting collaboration with the Belgian choreographer Michèle Noiret started in 1998 on <En Jeu > and continued since then, through fourteen choreographies. He collaborated with many artists on interactive and sound installations: FOAM, Marie-Jo Lafontaine, Fred Vaillant, Laura Colmenares Guerra and Mario Benjamin.

Prize of the Audience at the Noroit Competition (France, 91), Mentions (2002, 2005 and 2009) and First Prize (2007) at the Bourges Competitions and finalist in several other competitions.

His music has been played on the radio in several countries and has been programmed in many international festivals.

Interview for the 50 years of Musiques Nouvelles (French only)